Today's post is an elaboration of one of my entries for the Mothership 20x20 Jam. This is a one-shot scenario intended as a planetside adventure on a more civilized planet, if your players happen to spend some time on one. Feel free to run it either as a satire of the dehumanization rampant in the celebrity world and particularly the idol industry, or as a fun bloodbath with androids getting their heads messily blown off. Or both. Either (or both!) can work, depending on the overall mood at your table. You can also integrate Pink Is Blood into your campaign setting without actually running this scenario. Cannibalize, cannibalize, cannibalize.

You can also eschew the space setting entirely if you want, and plug this scenario directly into the currently in development official cyberpunk hack for Mothership, null.hack, with relative ease.

Email ThisBlogThis!Share to TwitterShare to FacebookShare to Pinterest
Labels: mothership

This is a list of 10 different alien creatures you might encounter during your work assignment on the hellish, radioactive garden planet known as Curie's World. This is only a very narrow slice of the planet's staggering biodiversity, but hopefully enough to get your gears turning.

Do you want to give your players a Company job that actually pays well for once? Sure, but they'll have to suffer for it.
Welcome to Curie's World, one of the worst hellholes a teamster could possibly find themselves in.
[Content warning: cancer, body dysmorphia, psychological abuse.] 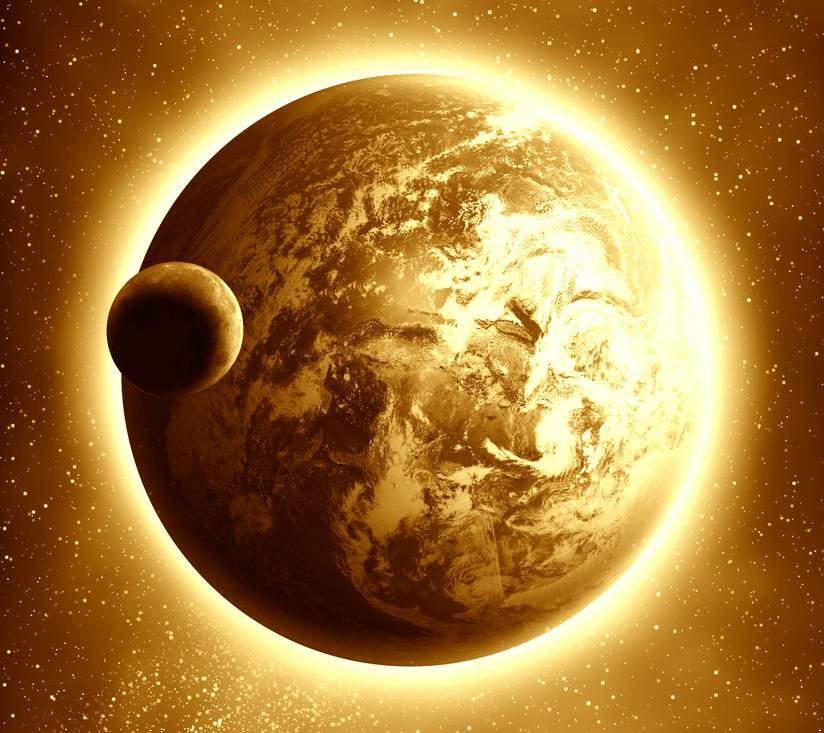 At first glance, Curie's World doesn't seem all that bad. It's a rocky planet slightly bigger than the Earth, with continents, seas and a thick, turbulent atmosphere. A balmy average temperature of 23°C (despite its distance from its dim red dwarf primary) and a surface gravity of just 1.1 g make the planet pleasantly familiar to Earthers, while its low axial tilt and relatively ineccentric orbit means there are no wildly changing seasons. Much of the planet is covered in warm, shallow seas. The atmosphere, while quite vaporous and containing trace amounts of certain poisonous gases, is nitrogen-oxygen based, richer in oxygen than Earth, and breathable as long as said poisonous gases are filtered out beforehand (a relatively simple task). The planet bears rich, thriving life. Sure, the surface may be a little dim and foggy, but still very comfortable as far as planets go. By all counts, Curie's World should be an ideal colony.
So what's the catch? 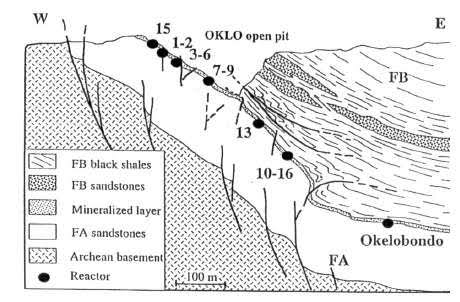 Natural nuclear fission reactors are geological formations composed of a uranium deposit, rich in fissile ²³⁵U, which becomes inundated in groundwater. The groundwater acts as a neutron moderator and enables the deposit to undergo a self-sustaining chain reaction. When it reaches criticality, the reactor soon raises temperatures by a few hundred degrees, boiling away the groundwater, which stops the chain reaction. Once the reactor cools off, groundwater trickles back into the deposit, and the cycle starts again.
On Earth, there is only one known site with natural nuclear reactors. It is located in Oklo, Gabon: a complex of 16 reactors which ran for a few hundred thousand years approximately 1.7 billion years ago, depleting 5 tons of uranium oxide and producing an output of about 100 kW thermal energy in the process. A reactor cycle lasted about 3 hours, with 30 minutes of criticality followed by 2 hours and 30 minutes of cooldown.
It is believed that natural nuclear reactors cannot exist on Earth anymore, due to the decay of ²³⁵U content in uranium ore over time.
On Curie's World, planetological survey probes have found 235,354 natural nuclear reactors so far. And counting.
Quirks of the planet's geology cause these unusual features to occur readily. Abundant uranium deposits, richer ²³⁵U content in those deposits, and a much higher percentage of heavy water in the Curian water cycle compared to Earth all make criticality much easier to achieve. Hundreds and hundreds of running fission reactors dot the landscape of this pristine wilderness planet. At night, the seas are illuminated by an eerie blue glow: Cherenkov radiation cast off by undersea reactor sites, which form long geological chains similar to volcanic island chains on Earth. 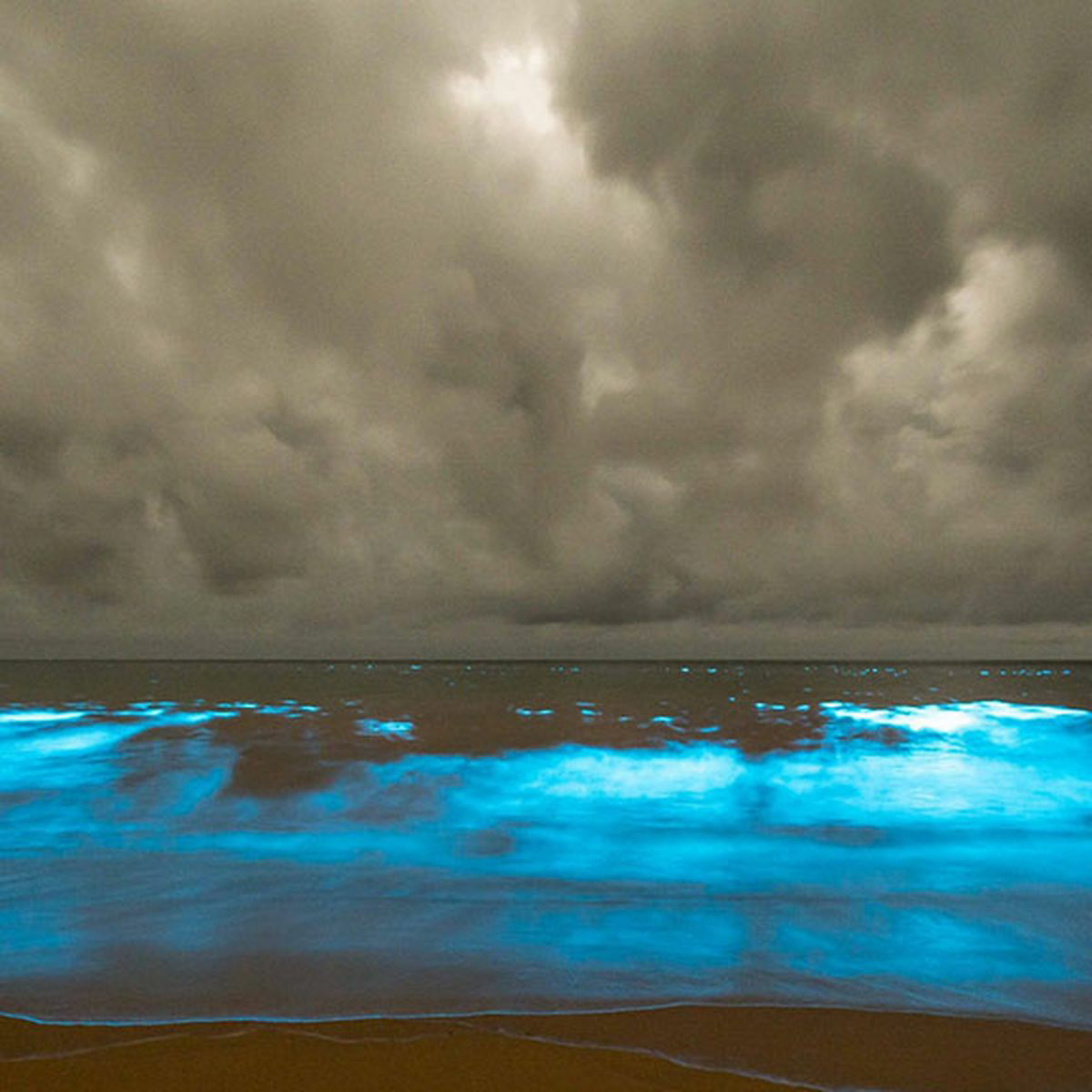 This lush paradise planet is a radioactive hell. On top of all the dangers of a biodiverse garden planet, the ubiquitous reactor deposits underfoot emit massive amounts of ionizing radiation during their cooldown cycles, when their fission products are not insulated by groundwater. To make it even worse, the primary of Curie's World, a violent, highly metallic flare star, frequently and unpredictably erupts in energetic stellar flares, sending waves of ionizing proton radiation towards the planet. Curie's meager magnetosphere barely deflects any of it. (It does, however, make for some beautiful auroras, even very far away from the poles.) Setting foot on this planet, even in a hazard suit, is a sentence of slow, agonizing death.
In short, the Company is blowing through its Curian workforce like Kleenex. 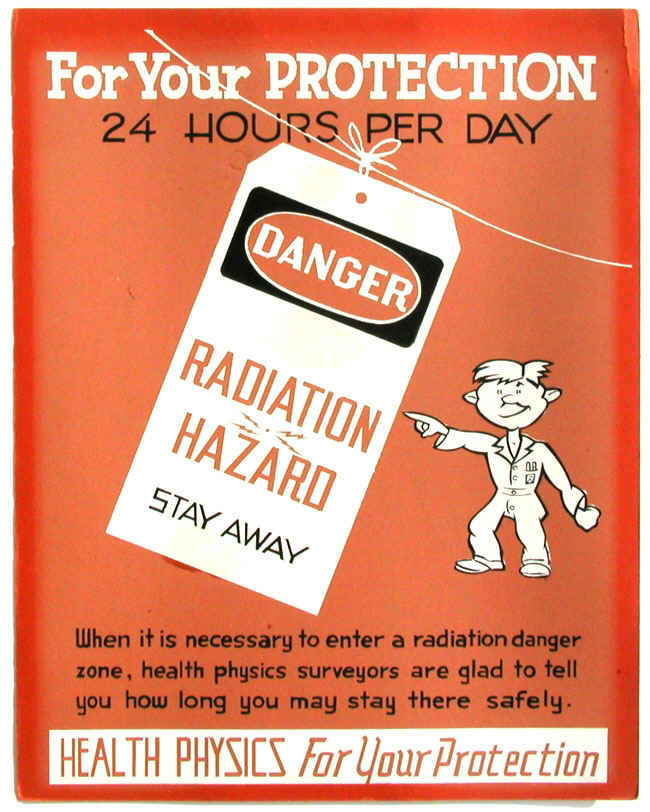 The Company is interested in Curie's World for a number of reasons. The most obvious is mining. Curie's crust is abundant in uranium ore, which is richer in fissile ²³⁵U than ore found on other planets, saving a whole lot of headaches on uranium enrichment and exotic neutron moderators. Other radioactive ores are also plentiful. What's more, the planet's waters contain a lot of deuterium oxide, or heavy water, which is separated out of Curie's seas by massive, floating water extractor stations, similar to oil drilling rigs in appearance.
The other, less immediately apparent value of this planet is biotechnological research.
Curie's World is a life-bearing planet. Large hosts of alien creatures populate the surface, with underground thermo- and radiotrophic organisms feeding on the heat and radiation output of the nuclear reactors, and tall, treelike radiosynthesizers (the famous "nuke trees") spreading their sooty-black, comb-shaped fronds towards the sky, nourishing themselves on the red dwarf's violent stellar flares like an Earth plant would on light. Upon these primary producers, diverse ecosystems of strange, exotic and often dangerous animals are based - all thriving within an environment that would horrifically and painfully kill an unprotected human being within days. 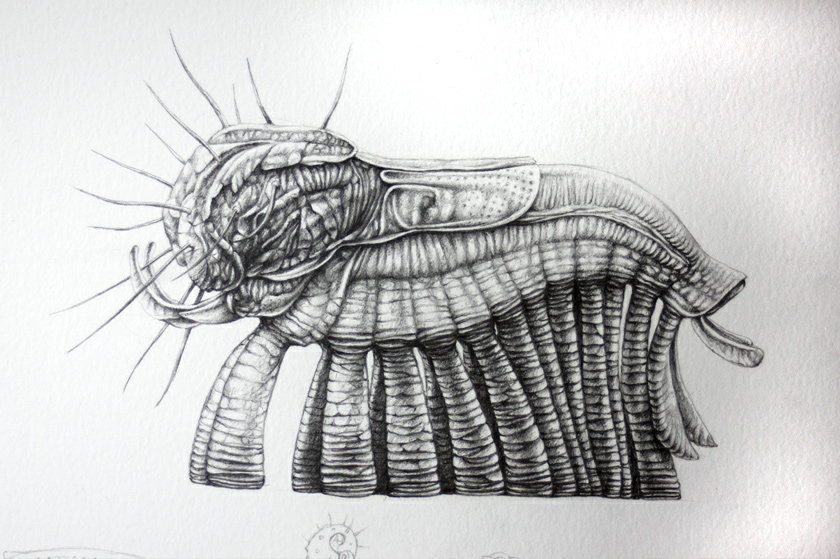 The solution to this mystery is that Curian organisms have the most powerful DNA repair mechanisms known anywhere, which enables them to avoid instantly dying from super space cancer in the radiation-bathed terribleness that is the environment of Curie's World. The Company's biomedical department is very interested in these mechanisms. Research into how Curian animals make do is projected to yield revolutionary (and eminently patentable) cancer treatments, life-extension techniques, and radiation protection for spacers. They also want to use the radiation-eating xenofungus to make self-healing radiation shields for spaceships, which will definitely not go horribly wrong in any way.
It's a terribly, terribly profitable planet, and the Company is willing to pour immense amounts of money and resources into exploiting it.

So where do the poor sods that are your players factor into all this?
Well the Company first tried sending probes down there, but the intense radiation fried their electronics very, very fast. So they started sending people. People restock themselves on their own, with very little Company input needed, and they cost significantly less to pay than an orbital drone factory.
Thing is, Curie's World is such a shithole that the only way to attract workforce is to actually provide a high pay. Working on this planet is widely regarded as one of the worst jobs out in the black; the only people who willingly take this job are generally utterly desperate, with nothing to lose but everything to gain. The good salary is the only thing that makes it worthwhile for most workers planetside.

Why is this poor teamster here?

When you arrive to work on Curie's World, they upload your mind into a simple, utilitarian, mass-produced sleeve. These come in one male and one female variant, and largely look the same - they're made for  work, not for convenience. They stash your original body in a large, efficiently packed cryobay, where it will stay for the duration of your work assignment. They give you a big pack of mildly effective anti-rad pills, a hazard suit, and the tools for your job, put you in a shuttle with fifteen other sleeved workers, and send you down. Then you'll work for a month or two, until you develop severe radiation sickness and die while vomiting and bleeding internally. (Here's some good rules for radiation sickness by Swampgirl.) At this point, a chip implanted into your sleeve's brain stem activates and beams your consciousness back to the Company space station in orbit, where they put you in a new sleeve and send you down again.

This is all a huge expense, but cheaper than sending a new probe every week, and still preferable to leaving the planet unexploited.
What are you bawling about? It wasn't even your real body, you big baby. Do you even remember what your own body feels like anymore? Here, take this neurochemical pill to suppress your crippling body dysmorphia, and get in the shuttle again. Don't you want that cute daughter of yours back in the slums on Omicron Colony to get into that nice university? Then you better get in the shuttle, friend, because that tuition isn't paying itself. 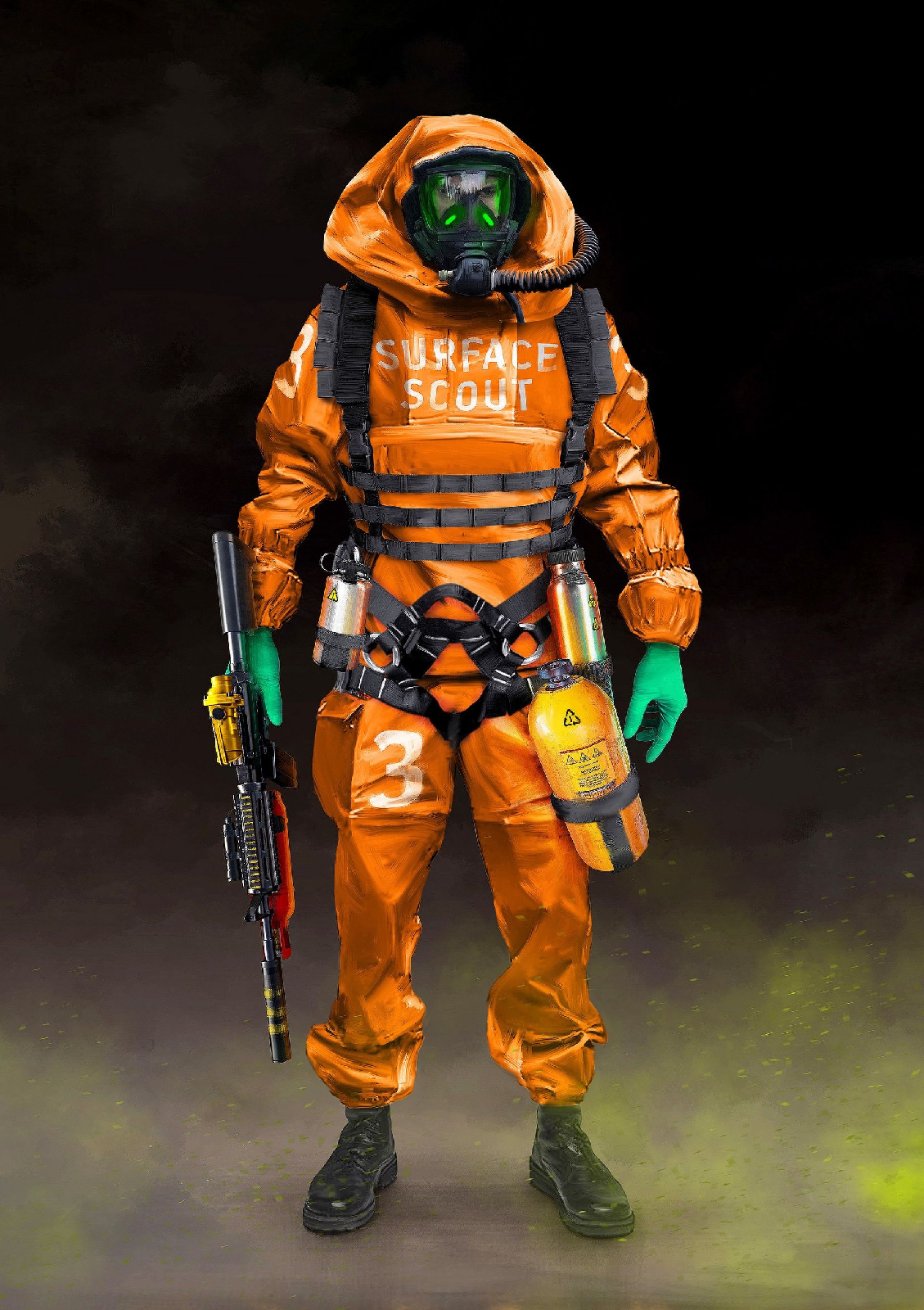 Today's post is an elaboration of one of my entries for the Mothership 20x20 Jam . This is a one-shot scenario intended as a planetside ... 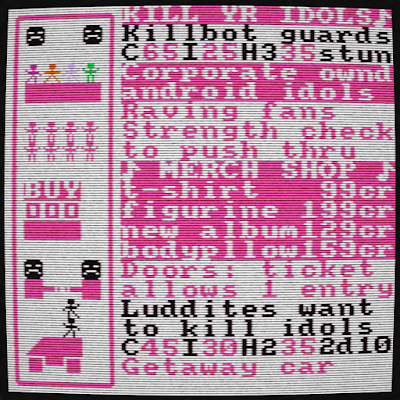