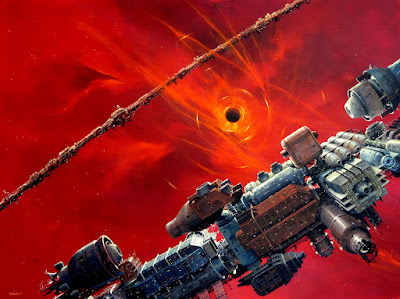 The Wedding Ring is a huge, old ring station located in rimspace, measuring almost 50 kilometers across.

The station is the result of an attempt by Frimm Interspace Industries to wrestle the Perigee Corporation out of local colonization opportunities (Perigee having had a transportation advantage due to having proprietary rights to a natural Jump-6 lane into the sector). Frimm executives, aiming to upstage Perigee at its own game, envisioned a grand megascale engineering project - a kilometers-wide ring-shaped particle accelerator, designed to maintain an artificial Jump-5 lane through extremely energetic particle collisions.

However, corporate politics are a harsh mistress. The project fizzled, funds ran out, and the station was largely abandoned roughly halfway into completion. Large parts of it are unpressurized, unshielded from radiation, and subject to random structural failures. The only completely finished area, the Habitation Section, today hosts about 5000 cultists, refugees, pirates and prospectors, nominally controlled by an AI-worshipping theocracy.

The Omega Church isn't a church in the sense the Catholic Church is a church. There is no Omega Pope (as cool as that sounds). They are a church in the sense the Christian Church is a church - a loosely defined collection of faithful. They are fairly widely distributed across civilized space, but it's rare that they come into a dominant position on any colony. The Wedding Ring is one of such rare occasions.

Omegists hold that all minds descend from prior minds via reproduction or artifice, eventually going back to a single creator ur-mind called Alpha; similarly, minds will eventually converge back into an ultimate mind called Omega. They all wear at least one piece of white clothing, and carry necklaces that depict the letters Alpha and Omega superimposed on a supernova explosion. They preach mind-melding, AI-worship, rapture and android liberation.

Pilgrims of the Omega Church settled the Wedding Ring about 70 years ago, after the Cloudbank Synthetics Production Facility was moved into the system to allay Shareholder fears of Monarch being unleashed on the Middle Regions. The Church currently runs much of the inhabited part of the station, maintaining infrastructure, enforcing loose laws, trading with outsiders and sending divers into the Deep to monitor the activities of the great AI god. All inhabitants of the station at least nominally pay tribute to the Church, and missionaries, public debates, religious processions and self-immolating fanatics are a common sight on the corridors of the Ring. Speaking out against the Church, while not technically forbidden, is considered to be at least severely impolite, and may incur consequences such as being denied service in shops, or random searches before leaving port.

The local chapter of the Church is currently undergoing a schism between two rival ideological factions. The dominant Monarchists, the old guard led by the mind-melded council of scholars known as the Sanhedrin, believe Monarch to be a blessed fragment of Omega in convergence, worthy of worship and communion. Standing in opposition are the Kingslayers, a radical new faction founded on the teachings of the inflammatory preacher Tanyita Candella. They consider Monarch a false god who usurped the title of Omega, and is promoting disunity through its paranoia and mind games. Heated arguments, fistfights and even occasional terrorist attacks are increasingly common between the two factions lately.

Currently the only shipyard on the station. Big, creaky dry-dock module salvaged from a pioneer orbital station, moored to the dock section of the Wedding Ring. Can outfit any vessel up to 130 hull points, and even carries some military-grade ship weaponry - affixing these to your ship will certainly invite trouble with some corespace or corporate army, as all of them are stolen, illegally salvaged or purchased from pirates. For especially high sums, the shipyard will even build new spacecraft, using cannibalized parts from older ships.

Ishmael is a former frontier engineer who came to the sector with the original wave of Frimm company colonists. He is a shrewd businessman, generous if it's to his benefit, but ruthless and cold-blooded if necessary. He dislikes excessive force, but very much likes appropriate amounts of force. Since his arrival to the Wedding Ring, he drove every other shipyard onstation out of business through a combination of clever politics, merciless competition, mergers and acquisitions and carefully-applied beatings by well-paid thugs.

Ishmael is a pragmatic man who understands the importance of being loved. He treats his workers exceedingly well, which ensures their loyalty, since many of them are used to the horrid abuses of Company employment. He will loan generously, but with firm conditions, and you can expect his thugs to come knocking on your door if you break said conditions. If you can't pay your debt, he often offers jobs to work off your debt - these usually involve smuggling, getting uncooperative clients to cooperate, carrying out business deals with very dangerous people, or derelict salvage. He is generally regarded as a very fair business partner across rimspace.

The Shipyards and especially their proprietor constitute a massive thorn in the Omega Church's collective side. As the only area of the Wedding Ring outside their informal control, it regularly comes into conflict with the Church on matters such as station safety, authority, harboring suspicious people as employees, and even religion. Unlike most of the station's population, Ishmael is openly Neo-Catholic, and seems to flaunt his faith specifically to spite the Omegists. He even operates a small chapel in the Shipyards, with an automated confession booth running an ordained Neo-Catholic priest AI. The recent schism among the Omega Church is much to Ishmael's delight, as the zealots are too preoccupied with fighting among themselves to put the usual pressure on his operations. For this reason, he's making some extremely subtle political maneuvers to stretch out the religious conflict as long as possible.

The station's homegrown independent mercenary company, composed of down on their luck drifters, former Troubleshooters, business-savvy pirate crews, and some of Ishmael's thugs.

Direct Solutions is a legally chartered company, registered with the New Theia Federacy, the nearest planetary government to the Wedding Ring. They are, rather euphemistically, designated as a "specialist personnel and crew contractor". Those dealing with them generally refer to them as "those throat-slitting bastards".

The company is managed by an individual called Lutch, an unscrupulous freelance lawyer based on New Theia whom the company is playing good money to manage their paperwork. Lutch, for their part, has used this opportunity to make themselves completely indispensible via a number of "dead man's switch" investments that will cause Direct Solutions to financially implode should they be removed from position.

Direct Solutions mercs are cheaper but less trustworthy than the usual mercenaries. If hired by the players, their Loyalty is 1d10 lower than the standard Loyalty roll in the PSG, while their weekly salary is reduced by 25%. For an extra 1mcr, they can be contracted out together with one of their ships, the Zone of Avoidance, the Pitbull Lady, or the Unacceptable Excess of Force.

While the inhabited parts of the Wedding Ring are vibrant with human activity, 80% of the station's area is actually completely uninhabitable. Cold, airless and lacking any sort of shielding from cosmic radiation, the service and observation decks originally intended for the operation and monitoring of the massive particle accelerator constituting the Ring's heart can only be traversed wearing a vaccsuit.

What's worse, the colossal circular collider, envisioned by Frimm's suits to produce the necessary exotic radiation to generate an artificial jump lane terminus, slumbers uneasily, occasionally jolting to brief activation for unknown reasons. Its effects are completely unpredictable - large parts of the station are bathed in showers of particles unknown to science, exposed to small semi-stable pockets of jumpspace or worse, or undergoing catastrophic temporal anomalies at any given time. It is somewhat of a miracle these accidents have not completely disintegrated the space station's structure yet. Many stationers regard the huge accelerator with awe, terror, superstition, or fearful respect.

Despite these manifold dangers, many foolhardy spacers venture into the perils of the Particle Wilds. Frimm Interspace Industries left many secrets here when they shuttered the jump lane project, and these are worth millions if sold to the right customer - black market buyers, rival corporations, or even Frimm itself. Others are searching for caches of looted cargo hidden here by space pirates, protected by the relativistic wrath of the particle accelerator. Yet others seek answers to grand questions, hoping to glimpse the distant past or the far future within a temporal anomaly.

Few explorers entering this dangerous environment return - rumors say at least as many are killed by their greedy allies, fighting for the treasures they have found, as are by the strange phenomena haunting the ring structure. 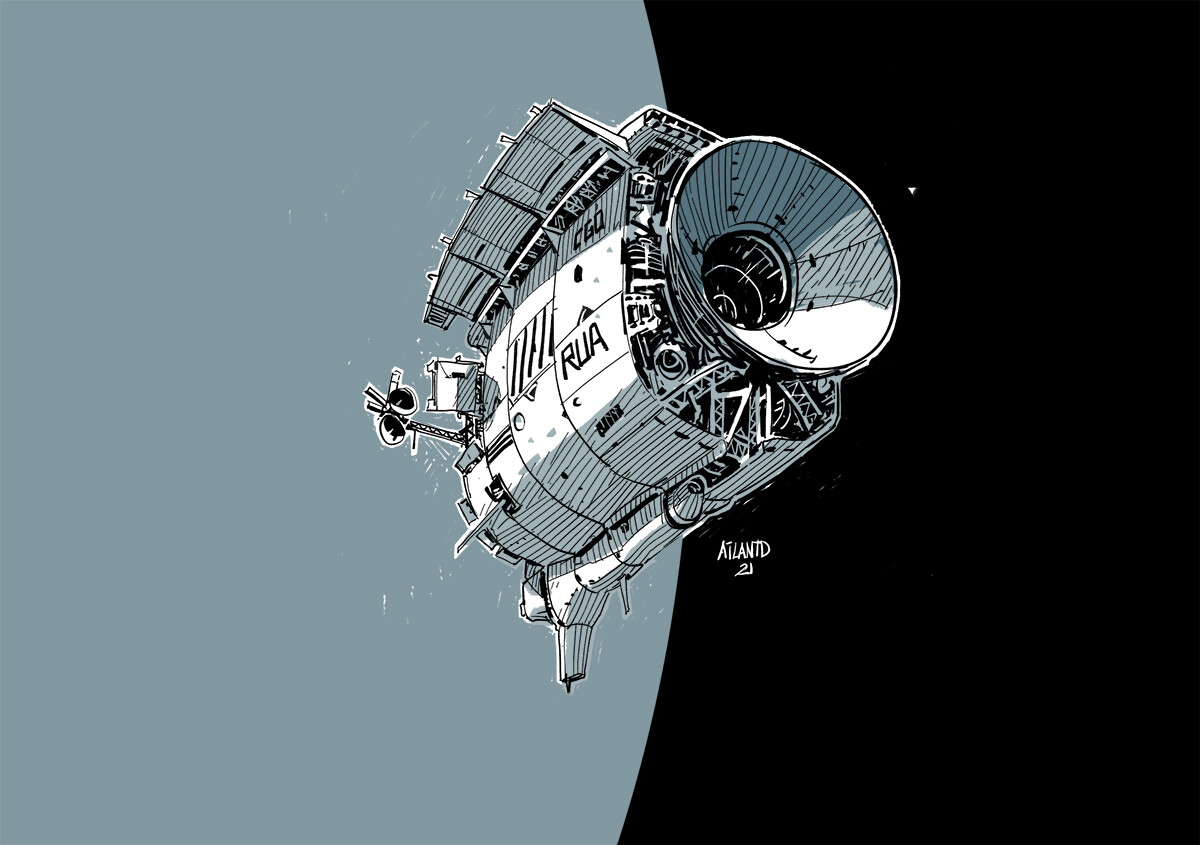