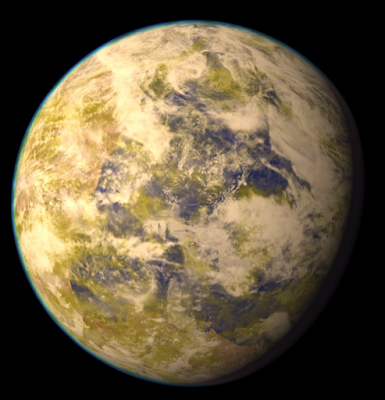 Clytemnestra is a supercytherean planet located in rim space. "Supercytherean" means it's Venus-like and somewhat larger than Earth. Like all Venus-type planets, this one too is an acidic pressure-cooker: dry, dim and unbearably hot, with an atmosphere dense enough to smash interplanetary probes into aluminum cans, all wreathed in an eerie veil of pale yellow clouds, composed of pure sulfuric acid. Beneath the clouds, an unforgiving chaos terrain of dark basaltic rock is concealed.

That's how it used to look, at least.

Planets by Perigee, a subsidiary of the illustrious megascale engineering megacorp known as the Perigee Corporation, has been hard at work terraforming Clytemnestra for the past three hundred years. Terraforming Venus-types is hard, slow, thankless work even by the standards of planetary engineering, generally considered to not worth the hassle compared to simply establishing cloud-city type colonies, but Perigee has a reputation for extravagant gigaprojects. Atmosphere extraction, temperature reduction, reversing the runaway greenhouse effect - the most talented planetary engineers of eight generations have worked tirelessly to turn this desolate world into an Earthlike paradise. Clytemnestra is the crown jewel of Perigee's terraforming business, a proof of the Corporation's groundbreaking and high-quality craftsmanship that can tame even the most hostile planets.

Also, it is failing.

When arriving to Clytemnestra, instead of the green gardenworld intended, you will witness a sickly, yellowish orb wreathed in thick, greasy-looking clouds, with small, sour lakes glinting in close clusters on the surface. Atmospheric scans reveal a very warm nitrogen-oxygen atmosphere with dangerous amounts of carbon dioxide, sulfuric acid, sulfur dioxide, carbonyl sulfide and hydrogen sulfide. Extensive orbital infrastructure girds the planet, most of it disused and drifting on dangerously uncorrected orbits. The great orbital mirror arrays, many of them shattered, and a daisy chain of semi-functional atmospheric extractor platforms in equatorial orbit, are the most visually striking. A Navigation or Piloting check is required to plot a trajectory that avoids significant space debris (1d10 MDMG).

Directly landing on Clytemnestra's surface is possible, but (as an automated welcoming broadcast will gladly inform you) inadvisable, due to the planet's high gravity and resultant high escape velocity making takeoff difficult and fuel-intensive. Instead, the cheerful synthetic voice in the radio directs ships to the Clytemnestra Beanstalk (brought to you by Perigee Superstructurals™!), a space elevator whose anchor station provides comfortable accommodation until the arrival of an elevator capsule.

The station is indeed comfortable as far as rimspace accommodations go, though quite pricey (the players can always choose to stay in their cramped ship and only pay the docking fee until the capsule arrives). Flashy Perigee logos are everywhere, and videoscreens loop advertisements of the planet in its intended fully-terraformed state in the common areas, all set to a playlist of charmingly meaningless core region pop hits. Smiling subturing androids provide room service, guidance and other services. Despite the station's pleasantries, the facilities have an eerie air - the internals, quite roomy for a space station and evidently designed for accommodating large throngs of visiting spacers, echo with emptiness. There is a 95% chance the players are the only visitors at the station at any given time.

(To create an air of unease appropriate for a huge yet empty space station, it's recommended to reroll this each day of their stay in front of the players, as if you were rolling for some more threatening event. Barring potentially incoming space debris, the station is perfectly safe, but the players don't know that.)

The central area of the station serves as a departure/arrival lounge for the only completed elevator capsule, which is continually making rounds up and down the 42,000 km polybuckminsterfullerene cable. An airport-style noticeboard lists incoming and outgoing capsules, displaying nothing but an endless back-and-forth of "Capsule 1" between "Anchor Station" and "Electra Dome". The capsule is inbound to the station in 1d5 days, and takes a little over 3 days to make the trip in one direction.

The landscape around the elevator's descent is dominated by three massive geodesic domes, their duraglass covering darkened with UV protectants and chemical corrosion. These are the dome-cities housing the entirety of Clytemnestra's populace - the one the cable runs down to is Electra Dome. To the north is Orestes Dome, to the northeast, Iphigenia Dome.

The architecture of Electra Dome is dominated by looming ISRU-concrete city blocks, citywide monorail networks and large agri-terraces. Everything is dusty, at least somewhat crumbling, and 80 years obsolete. The infrastructure is sturdy and durable, but clearly badly-maintained. Air recycling is handled by colossal filter facilities whose constant rumbling fills the dome at all hours of the 32-hour local day. The darkened panels of the geodesic dome loom above, casting a constant shade. Despite its ubiquitous disrepair, the colony is generally clean and orderly. A durable monorail track connects the port dome Electra to the less welcoming, spartan Orestes Dome. Outsiders are always given a few suspicious glares here.

Electra Dome hosts some two million colonists, and Orestes Dome about a million. They're shorter than the average spacer, pale-skinned, red-headed and thick-set. A combination of natural adaptation and a regimen of specialized growth factors makes them well-adapted to their high-gravity home. 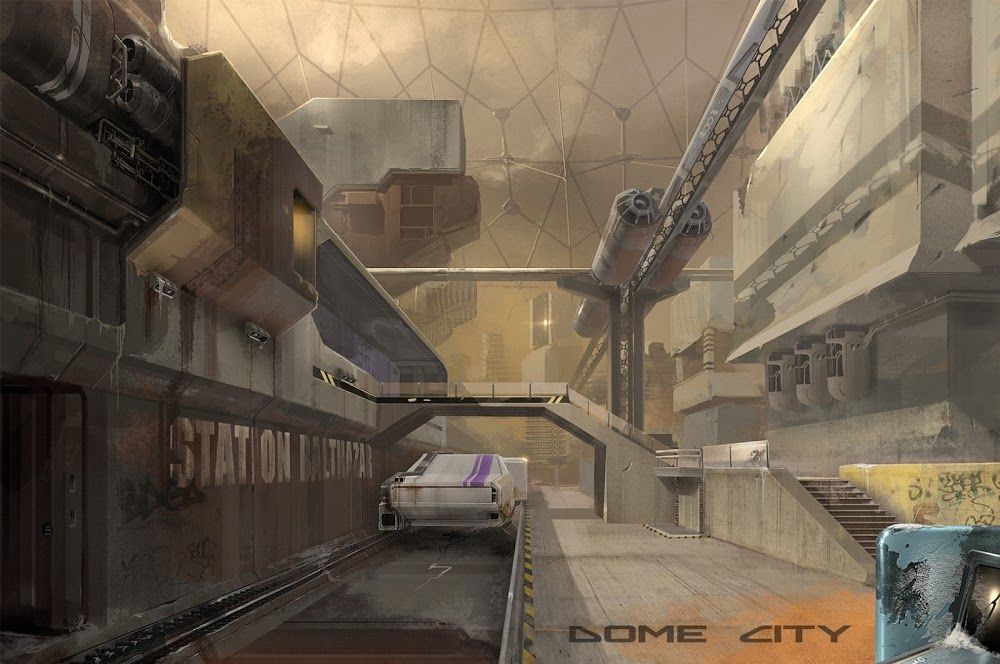 The players will probably learn relatively soon that Iphigenia Dome is abandoned. Infrastructural and environmental problems caused its population to collapse, with the refugees moving to the other two domes. A lack of available resources meant the dome was never repaired or resettled, and slowly fell into dilapidation. The monorail lines leading from Electra and Orestes to Iphigenia are still relatively intact, though not regularly maintained, and no trains go there - there's simply no need to.

The locals don't treat this as some dark secret - while they don't advertise it, if asked they'll cheerfully and nonchalantly tell you about their creepy abandoned arcology and the massive humanitarian disaster it spawned. In general, the entire colony radiates an almost creepy sense of dauntless optimism, despite their rapidly failing infrastructure and the steady deterioration of Clytemnestra's environment into the acidic hell it was before the terraforming effort.

The culture of Clytemnestra Colony is the result of precise memetic engineering designed to prepare the colonists for a lifetime of difficult colonizing work, and now that the colony is slowly deteriorating and Perigee is pulling its funds and forces out of an obviously failed project, their culturally engineered positive outlook and collectivism gives them an almost disturbing quality. The colonists are not brainwashed. Their central values of harmonious cooperation and considering Clytemnestra their binding mother planet are as much a cultural idiosyncrasy as, say, American exceptionalism - albeit artificial ones. Yet, for whatever reason, very few outsiders ever settle down on Clytemnestra. 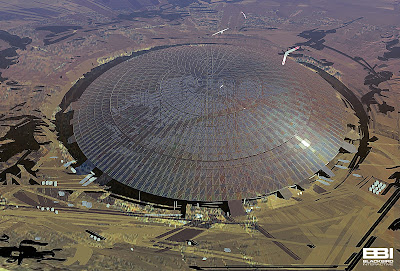 How to use Clytemnestra in your game: