"Floater" is a catch-all term for dogs adapted to zero-gee. They are not a standardized breed, or even a group of breeds; while standard floater breeds (such as the Gyrohund, the Vostochek and the Floating Pointer) do exist, most floaters are mutts.

These are very strange dogs, optimized for life in a zero-gee crew capsule. Their limbs and spines are unusually flexible, so they can bend themselves in half like a cat, squeeze through narrow vents and reach halfway across a habitation capsule for a holdfast. With no solid ground in the way, their claws have curved and elongated into a unique slothlike shape, enabling them to hook onto ladder steps and handrails used by the human crew. Their tails are either long and prehensile, almost simian, or extremely short, so as not to get in the way. They range from medium to small-sized, and don't take up much payload weight.

Floaters are a long-haul spacer's best friend. The common stereotype is that all spacers are cat people, but many crews swear by these weird little space-adapted dogs instead. They're most commonly used simply as companion dogs, to alleviate the loneliness and monotony of months-long sublight coasts or survey missions. But they have a number of direct uses too: a trained floater can detect the smell of stowaways, hunt pests in the air vents, or even fetch tools for the engineer. They also make surprisingly scrappy fighters - more than one pirate boarding party has been mauled to death by a small dog that can move as quickly in zero-gee as regular dogs on the ground.

The Centauri Shepherd (or Centauri for short) is the oldest extrasolar dog breed, originally bred by the first permanent colonists on Proxima Centauri b for the protection of their livestock against the planet's local xenofauna. Centauris are tough, rangy dogs with pointed snouts and bluish-gray fur with a cream-colored underside. The low gravity of Proxima b allowed them to develop an unusually slender build, almost like that of a sighthound, without sacrificing significant muscle. They have a very unique, unmistakable low run, sinking their claws into the earth to drag themselves forward in the lower gravity of their homeworld, using their great bushy tails to keep their balance.

The Centauri is a classic symbol of Proxima culture, a symbol of their resourceful ancestors for what is now an affluent, well-developed corespace world. Romantic depictions of a single Centauri bravely holding a Hopping Reaver at bay while ragtag colonists take aim with their pulse rifles are common in patriotic art pieces. During the regime of the Anti-Terran Council, Centauri Shepherds were trained into vicious attack dogs which kept watch of political prisoners and were reputedly loosed in packs on enemies of the state. They are still a preferred breed of police and military dog by many corporate security forces and Middle Regions dictatorships.

Centauris have an extremely strong protective instinct, and will fight to the death to protect their charges. Mistrained centauris may try to aggressively isolate their owners from other people, viewing all others as enemies and mercilessly attacking them. They are cathemeral, with no coherent sleep cycle; Proxima b is tidally locked, with no days or nights, so they sleep in small, irregular naps.

Stowies are a family of lapdog-sized, stout little breeds with a comically large, long muzzle. The most famous is the Marinerian Stowie, the iconic Martian dog (think the same cultural role as the English Bulldog for Britain). The name derives from "stowaway", but these dogs are anything but: they are essential for the survival of any colony or spacecraft with its own pressurized atmosphere.

Stowies are frequently kept as showdogs and companions, and come in many different colors and styles. Their original purpose, however, is sniffing out air quality - early detection of gas leaks, fried circuitry or disease could mean the difference between life and death. Stowies are not particularly intelligent dogs in terms of problem-solving ability, but they can be trained to provide separate signals for hundreds of different smells which they can pick out of the faintest wafts, more reliably than any electronic air analyzer. Even among dogs, the olfactory sense of stowies is utterly unmatched.

The first colony on Gliese 433 f was famously saved by Birch, a 3-year-old Moonwhite Stowie whose incessant barking at a particular air filter, despite all measurements of it being nominal, finally prompted engineers to remove it. They found a massive colony of genetically engineered runaway neomold which had been proliferating in the vent system for weeks, feeding false data to the telemetry systems via electrified hyphae and preparing to burst its spores on the whole colony at once.

Black Snarlers were bred on the lower decks of Flying Miami for use in illegal dog fighting rings. Dogs are outfitted with shoulder-mounted weapon harnesses controlled by neural interfaces, and loosed upon each other. Sometimes the ring is spun up to more than 2 gees, just to make it interesting for the dogs.

Snarlers are big, nasty fighting dogs. Their coat is thick and black as tar, bred for intimidation and protection from snapping jaws. Their musculature and bone structure is almost elephantine, capable of bearing incredible loads and holding up their bodies in super-Earth gravity. Outside of the fighting rings, Black Snarlers became popular with pirates, mercenary companies (who field entire packs of the massive black dogs as shock troops and psychological warfare) and even some corporate security forces, although the latter often find the dog's stubborn temperament and dangerous handling to not be worth the effort of training them as compared to a more expensive but much more tractable combat drone.

However, despite their ugly reputation, snarlers are no monsters. Turns out breeding a dog for inexhaustible tenacity, enormous carrying capacity and the mental acuity to tune into neural weapon control systems gives you a really strong, really intelligent dog... in other words, an ideal working dog. Absent the abuse of a dog fighting trainer, Black Snarlers actually have a very calm temperament, and they are very observant. If you have the supreme patience to build trust with a snarler instead of beating it into obedience, you gain a patient, loyal and extremely intelligent ally. Working snarlers can be found sporadically in rimspace, helping people by bringing their huge strength, keen mind and specialized high-gravity anatomy to bear. Certain derelict scrappers often rely on snarlers to simply tear off hull panels like tissue paper, explorers on high-gravity planets rely on them to carry and retrieve equipment, and to carry out rescue operations.

artist: Swampgirl Canon Mothership has Monarch , Dan has the Celestials , Swampgirl has the Gods of the Black . It's time for me to tal... 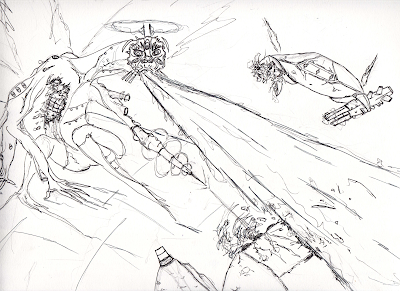